Huot Gulch has been at first staked and named in 1902 by W.M. Richardson, I.A. Jackson and James Huot, after a placer gold discovery was done by the trio around its lower section.
Since that day no much attention has been paid to that placer, beside few hand-mining attempts which today are still (barely) recognizable along the lower entire course of the gulch (after 1903 the Klondike quickly depopulates and much richer goldfields became available to the few left miners, closer to town!).

By the end of the ‘60s this region became popular among hard-rock exploration companies (Connaught Mines 1969), thanks to the presence of lead-silver veins scattered along the Fifty Miles Plateau and possibly connected with the presence of a big intrusive body of granodiorite-diorite.
Since then, other enterprises explored these areas for valuable mineralization of silver, lead, copper, molybdenum. Less or none interest was dedicated to placer gold exploration due to the low price of the precious metal before the rising of 2006. 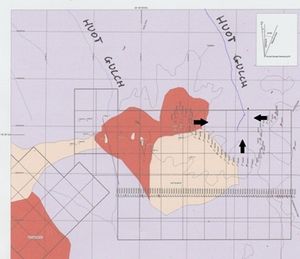 In 2010, our geologist participate as field-geologist to a soil sampling campaign conducted by geologist William D. Mann for Klondike Silver Corp and aimed to test the surrounding of Mount Hart for valuable deposits.
The results of that campaign revealed the presence of few gold anomalies mostly located around the watershed of Huot Gulch (see the figure on the left).

The map drafted by senior geologist William D.Mann is clearly showing the convergences of soil enriched with gold-particles toward the main branch of Huot Creek.
At the time of this soil sampling campaign our geologist was already dedicating my attention to the placer industry of the Klondike and he immediately started an historical research about that creek. The research confirmed the presence of past placer mining activities in the area (Boucher Creek and its two tributaries Butler and Huot Gulches have been hand-mined by a French syndicate at the beginning of last century). 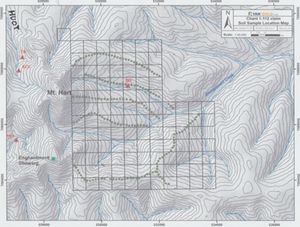 In 2012, Ryan Gold Corp published the result of a sampling campaign conducted by senior geologist Hua Jin in 2011.
The results are matching the ones achieved by Klondike Silver: gold anomalies are located in the area surrounding the watershed of Huot Gulch (see map on the right).

In 2013-14 we prospected the entire floodplain of Huot Gulch to confirm the historical reports and we found signs of old-timers activities along the creek.

Huot Gulch is a right limit tributary of Boucher Creek, which is itself a right limit tributary of Sixty Mile River.
The gulch is 7 km long and its watershed has a total area of 10 km2, with a noticeable water flow for such of modest dimension.
The headwater of Huot Gulch starts from two branches located along the North-facing slope of Mount Hart and descendent with an initial gradient of > 5 toward the flat of Boucher Creek in a S-N direction.