Five Mile Creek has been recorded for the first time as ‘placer gold concession’ in 1902. That concession has been kept in good standing until 1923 and then the creek has been mostly neglected with sporadic attempts of limited exploration (all the mining action went to the rich Miller and Bedrock Creeks and around them junction with Sixty Mile River!).

Only in recent days, with the booming price of gold, the attention of placer mining industry is going back to the ‘minor producers’: the left limit tributaries of Sixty Mile Creek (Fish, California, Swede, 12 Mile and also 5 Mile Creek). At California Creek, which has been prospected and tested by our group in 2014-15, a placer mining operation is active since summer of 2016 and, after the encouraging results achieved in 2017, is planning to go ‘full blast’ in 2018. At 12 Mile Creek, an Australian-Canadian enterprise started a mining activity in 2016 with very limited equipment, which exposed some gold but didn’t allow a profitable recovery of it. This same party is now planning to come back this year with better equipment.

Five Mile Creek is right in the middle of proven goldfields (12 Miles to the left, Big Gold to the right, and Browns and Moose right behind) and at its confluence with Sixty Mile Creek there is a Canadian enterprise, successfully mining. 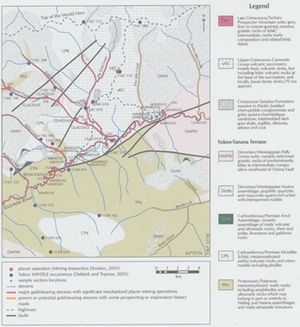 In 2005, a report done by William Le Barge for the Yukon Geological Survey along the entire Sixty Mile River area, was pointing at the potential of two underexplored creeks: 12 Mile and Five Mile (see figure on the left).

This creek has potential for good placer buried under a coverage of interglacial depositions (which were discouraging  the prior prospectors).

In 2015, Jean Paultler published the results of an extensive soil sampling campaign conducted in summer of 2014 by Ground Truth Exploration.

The report shows an interesting high concentration of gold anomalies  (up to 525 ppb!) right in the right limit of the watershed of Five Mile Creek.

For the coming summer of 2018 we planned an ultimate exploration campaign to be conducted during the entire month of June. The idea is to start with an accurate geophysical survey (by using Ground Penetrating Radars) followed by a drilling campaign (by using an 8 inch hydraulic auger).
This project is aimed to test the floodplain of Five Mile Creek along its entire length, to eventually locate valuable pockets of placer gold.

Five Mile Creek is a left limit tributary of Sixty Mile River.
This watercourse is 9 km long and quietly flows (average gradient 1.3) from North to South, at the bottom of a well excavated valley with a medium-wide floodplain.
Its watershed measures 26 km2 and collect a noticeable quantity of water.
The headwaters of Five Mile Creek are two, located along the southern slope of the ridge where Top of the World Highway runs. 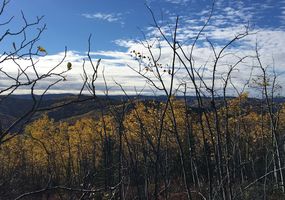 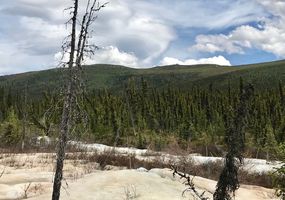 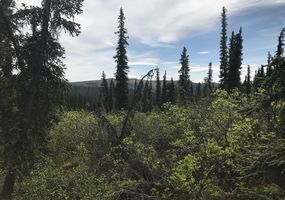 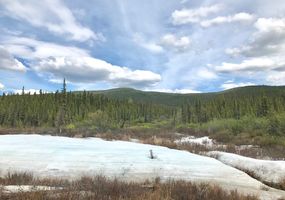